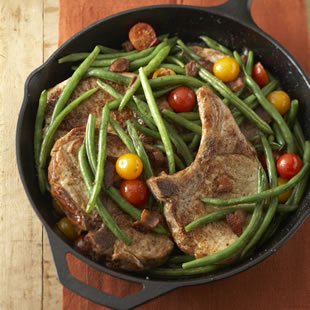 When I think of cast iron, I think of crispy fried chicken, succulent catfish nuggets, and sweet, buttery cornbread to die for- mainly because I went to med school in Nashville, surrounded by some of the most amazing soul food restaurants that exclusively prepped their food in cast iron cookware.

And though cast iron is quite infamous for making the most delicious of deep fried goodies, that isn’t all there is to this fantastic piece of cookware. For example, did you know that there are actual health benefits to cooking with cast iron? Yup, and you’re about to learn more about them very soon! But before I get to that, here’s a quick intro course for those who are just now discovering the awesomeness that is cast iron cooking.

Cast iron is iron that’s been heated and “cast” into a very sturdy piece of cookware.

Why cooks love it

Besides a few health benefits that I’ll get to later, three of cast iron’s greatest claims to fame is that 1) unlike most other types of cookware that get worn out over time, cast iron can literally last a lifetime, or several lifetimes at that, 2) it’s oven-safe, and 3) it retains heat and evenly distributes it in a way that most modern cookware cannot. These are things you’ll really come to appreciate when your inner Top Chef wants to serve up the perfect steak or oven roasted chicken with veggies.

How to prep cast iron

One important thing to mention is unless you’ve purchased “pre-seasoned” cast iron, you’ll need to “season” your cast iron first before cooking in it. Here’s how:

1. Rub a generous amount of healthy cooking fat (like coconut oil) all over the cooking surface of the pan.

3. Place pan inside oven for 15 minutes. Take pan out and pour off any extra oil. Be careful and use oven mitts because oil will be extremely hot.

4. Place pan back in oven for another 2 hours, turn off heat, then let cool.

And voila! Your pan is now seasoned and ready to cook on. Oh, and did I mention that the more you cook on it, the better your cast iron becomes? Oh yes, just like women and fine wine, cast iron just gets better and better with age 😉

Alright, so now that we’re all up to speed on cast iron cooking in general, let’s check out why cast iron rocks in the healthy eating department.

The act of cooking can actually leach vital nutrients and minerals from food, but this isn’t the case with cast iron. In fact, cooking with cast iron actually releases certain nutrient into your food- iron to be exact. For example, cooking certain foods in cast iron, especially acidic foods like tomato sauce, can actually increase your food’s iron content by as much as 10-15 times. This is a very good thing, particularly for women, because we’re more likely to become iron-deficient. And iron deficiency can ultimately lead to health problems like extreme fatigue when working out and even weak, brittle nails.

Another benefit to cast-iron cooking is that you’ll avoid harmful chemicals found in common, every day cookware. Ever heard of perfluorocarbons or PFC’s? They’re the very effective repellent coating that keeps food from sticking to Teflon and many other types of nonstick pots. Unfortunately they’re also a very harsh chemical that’s been linked to diseases like cancer. And if you want to limit exposure to PFC’s concern you, one very easy way to do it is by cooking with traditional cast iron.

Another bonus to cast iron is that when seasoned properly, cast iron will become non-stick- which means less oil when cooking! Sweet! Just make sure you properly season, clean and store your cast iron. And last but not least, have fun cooking on it. Because the more you use it, the better cast iron gets, and non-stick cooking will still be easy-breezy.

Do you cook with cast iron? Have a particular brand of cast iron cookware that you love the most? Let me know in the comments. – Doc