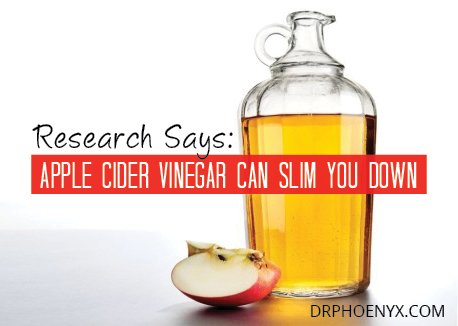 Remember the time you bought that big 32 plus ounce bottle of apple cider vinegar when a recipe only called for two tablespoons? Sure you could’ve gone for the smaller 10 ounce bottle of vinegar, but the 32 was on sale and half the price. So you bought the 32, instantaneously feeling you made out like a bandit. Or maybe some of you heard how apple cider vinegar’s an awesome natural hair care product and bought a bottle for that and nothing else. Only problem is you’re now stuck with a huge bottle of vinegar taking up a ton of space in your pantry, and you have no clue what else to use it for. Well many of you will be pleasantly surprised to learn that apple cider vinegar (aka ACV) contains key nutrients that could make a significant difference in your metabolism, thus making ACV a formidable ally when it comes to weight loss.

Let’s take a look at what research says about the health benefits of ACV:

1. According to the U.S. Centers for Disease Control and Prevention, more than one-third of the U.S. population is obese, and it’s common knowledge among health & fitness experts that a diet that’s high in carbs and sugar is the main culprit behind this obesity epidemic because carbs and sugar cause blood sugar to spike, which causes insulin release, which causes fat storage. Now here’s where things get good: A study published in the Annals of Nutrition and Metabolism showed that adding about 2 teaspoons of ACV to a meal containing carbohydrates can reduce the post-meal blood glucose spike by 20%. Research published in the Journal of Functional Foods also found that sipping on apple cider vinegar before a meal can help reduce the release of sugar into the blood and improve insulin sensitivity. And yet another separate study found that adding a shot of vinegar to meals can help stimulate satiety and thus prevent overeating.

Fit Tip: For all you mango-lovers, I recently mentioned ACV in an Instagram post and how I like adding splashes of vinegar to mango (and other foods containing sugar) because it can help control blood sugar levels and insulin spikes.

2. ACV contains a high concentration of acetic acid that has been shown to improve digestion by aiding the breakdown of protein into amino acids. These amino acids are then used to build other important proteins in the body, such as growth hormone (GH), which is a key hormone for increasing metabolism and breaking down fat cells.

3. The acetic acid in ACV helps you better absorb iron from the foods you eat. Iron is essential in the production of hemoglobin and myoglobin, which carry oxygen cells all over your body, particularly to your muscles. And thus, the more oxygen that’s available to your muscles, the more calories you’ll be able to burn during exercise

Get The Right Vinegar

As far as what kind or brand to buy, it’s best to avoid the clear ones, and instead go for the unpasteurized brands with a darker, cloudy appearance and containing a cobweb-like floating substance referred to as the “mother.” The “mother” is an indication of higher quality. So when it comes to ACV, the “dirtier” looking the better. The murkier ACV looks, the more nutrients it’ll contain.

Fit Fact: Manufacturers often distill vinegar to remove the “mother” because this murky looking substance can make vinegar look unappealing to customers. However, the murky stuff is actually good for you and what you want. And as in most cases, the more processed a food is, the less nutritious it’ll oftentimes be− and this same fact holds true for apple cider vinegar.

So to recap: Apple cider vinegar can help with controlling blood sugar, with promoting weight loss, and the best ACV is the one that contains “mother.” As far as how to take ACV, it’s rather simple to incorporate into your diet. For example, it can make a nice, crisp addition to salad dressings and marinades. Or it can also be added to a glass of water or juice. A good rule of thumb is 1 tablespoon of ACV to 8 ounces of water. You should always dilute ACV and never drink it straight up, especially if you have digestive problems.

Last but not least, on a parting note I want to add that the above benefits of apple cider vinegar don’t give you a get out of jail free card when it comes to carbs. Apple cider vinegar is not a miracle elixir, and some experts are still skeptical about ACV’s weight loss benefits.

Bottom line: You’re not going to shed several pounds a week by just drinking apple cider vinegar. Still, research clearly shows the benefits of ACV, and by incorporating ACV into a healthy diet and a solid exercise plan, you could end up giving yourself an extra leg up on achieving your weight loss goals.

Have you ever tried using apple cider vinegar to lose weight? – Doc

Enjoyed this post? Be sure to like/share with a friend!